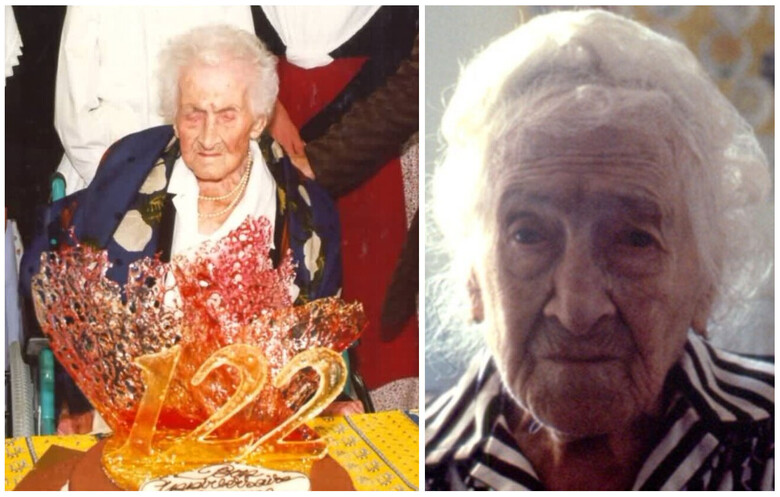 Jeanne Calment lived through many major events which shaped the world we live in today. These events occured in all areas of life; social, political, scientific and technological and a number within her home nation of France.

She lived through two World Wars, the development of television, the modern motor car, aeroplanes and numerous other items which are taken for granted today.

Asked on her 120th birthday what she expected of the future, she replied, "a very short one".

Louis Blérot Successfully crossed the English Channel on 25 July 1909, the first ever over-the-ocean crossing by a heavier-than-air craft. The cover of Le Petit Journal (8 August 1909) shows him completing his crossing over the white cliffs of Dover.

Eiffel Tower Opened on 31 March 1889 when she was 14, as part of the Centennial Exposition to commemorate the French Revolution. It was originally viewed as a temporary structure and was to be dismantled in 1910. However, due to its usefulness in many scientific fields such as astronomy and meterology, it was saved from destruction and remianed the world's tallest building until 1930.

Louis Pasteur Made a wide and varied contribution to science most notably in the fields of chemistry and microbiology. Best known for the development of the pasteurization process, he also did important work with vaccines especially rabies and anthrax.

Tour de France The world's premier cycling event was first held in July 1903. The winner was Maurice Garin, known as "le ramoneur" (the chimney sweep, his original occupation), who won with ease. he also won the following year, but was disqualified four months later for having taken a lift in a car. Now millions watch the race every summer.

World War I Victorious French troops marced through Strasbourg on 22 November 1918. The town was annexed by the Germans during the Franco-Prussian war (1870-71)but returned to France after the treaty of Versailles. Germany occupied the city again in the Second World War.

Vincent Van Gogh Jeanne Calment recalls meeting the great Dutch artist in her father's shop in Arles and selling him coloured penicls although the memory is clouded by the fact that he was scruffy and smelt of alcohol. His painting Sunflowers (Les Tournesols), one of a series of seven on the subject which were painted during his stay in Arles in 1888, sold at auction on 30 March 1987 for a then world record price of £22,500,000 (exlcluding buyer's premium).

President Jacques Chirac once said she was a grandmother to everyone in France.

She led an extremely active life, taking up fencing at 85-years-old and still riding a bicycle at 100. Jean played herself at the age of 114 in the film Vincent and Me (Can 1990) - becoming the oldest actress to appear in a film. Her keys to long life were olive oil, port, chocolate and although she enjoyed smoking, she gave up in 1995. Her doctor put this down to her pride rather than concern for her health, as she was too blind to light up and did not want to be dependent on others. Her humour was sharp right up until her death. Her customary reply to visitors who said: “Goodbye and until next year perhaps?” would be “I don’t see why not! You don’t look so bad to me.”

Sun flowers were her favourite blooms.

Her grandfther was Antoine Calment (b. 1803)